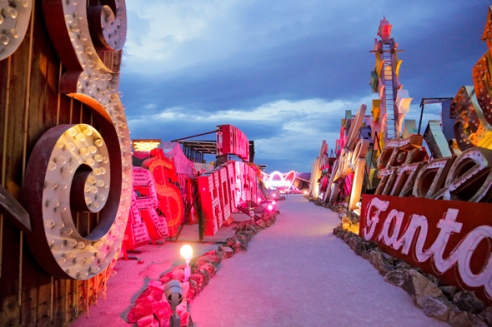 This here is a picture of the Las Vegas Neon Boneyard taken at what looks like dusk. This poem is about a man who defies faith and becomes enchanted with the neon promises of Las Vegas. Be they divine or full of horror, this man can’t stop the rise of the neo solis in his eyes.

He was just fourteen

Oh! Forgo this sunset—
It was blessed by the cursed
He’s seen the neo solis
He’s seen Moroni at its worst

Las Vegas! What a vision,
No borders, full of appetite

A mecca, hello transcendence
His flat shoes gathered
Pink neon powder
As he walked by the grand piano show

He wakes up now,
Everything is ignited
Flashing metal poetry
Breathing flames

He walks now,
Shoulders breaking open
Trampolines over angel’s trumpets
Asking the old meadows
Is a god so strange to be accepted?

Melanie Falconer is a freelance writer and editor living in Los Angeles, California. Her writing mainly concerns philosophy, personal experiences, cultural commentary, and her love of the visual and performing arts. If you’d like to reach out to her, you can do so here.